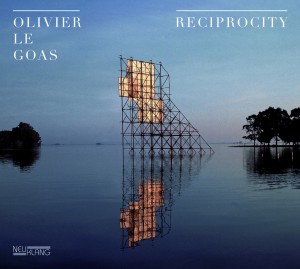 It’s hard not to be impressed by French drummer-composer Olivier Le Goas. His penchant for cascading harmonic movement on his eight original compositions here is matched by a crackling approach to the kit that can only be described as “creative overplaying.” Le Goas combines both aspects on his fifth recording as a leader, which features the exceptional playing of esteemed colleagues Kevin Hays on piano and guitarist Nir Felder, who forge a kind of Lyle Mays-Pat Metheny kindred hookup on the front line throughout Reciprocity. Together with bassist Phil Donkin they create an appealing sound that has one foot in chamber-like formalism while also exploring heightened realms of improvisation. And Le Goas underscores the proceedings with his hyperactive polyrhythms and admirable command of odd meters.

The tricky, time-shifting “Corners” kicks this collection off in spirited fashion. Felder and Hays double the melodic line in classic Mays-Metheny mode while Le Goas busily traverses the kit with polyrhythmic aplomb. Fielder’s flowing solo here is right in the Metheny zone. The drummer resorts to some gentle rubato brushwork on the delicate ECM-ish intro to “Since I Know,” which develops into another intuitive flurry on the kit alongside of Hays’ Keith Jarrett-like stretching and Felder’s legato fusillades on their respective solos. Hays and Felder also soar freely on the 10/8 romp “Curves And Colors” while Donkin gets an extended solo taste on the lyrical ballad “Day Home.” And the vibrant “Call,” another showcase for Felder’s fluid chops, recalls Travels/Letter From Home-era Metheny. Great writing, superb execution and inspired soloing make this one highly recommend.