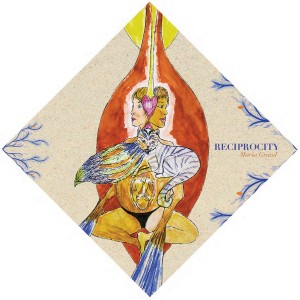 Imminent parenthood has inspired wondrous creative expressions of various artistic disciplines. Tenor saxophonist and composer Maria Grand is the latest jazz musician to use her pregnancy and the birth of her son as creative fuel, resulting in the intriguing Reciprocity.

Grand’s steady, protean saxophone lines interact with Savannah Harris’ jostling drum patterns and Kanoa Mendenhall’s bubbling bass lines on such kinetic cuts as “Fundamentals, Part II” and “Whabri.” When the trio engages in wistful interplay such as the first half of “Creation, A Home In Mind” and “Creation: Ladder Of Swords,” the music evokes the caressing touch of a mother cradling a newborn.

Wielding a pliant, sinewy tone, Grand’s improvisations often alternate between writhing, well-paced lines that uncoil with remarkable ease and wayward logic, and probing slow-moving passages marked by elliptical melodicism or shamanistic motifs. With Harris and Mendenhall, she forges a sterling accord.

Reciprocity unfolds in a programmatic manner as the compositions ebb and flow in a cyclical fashion. Throughout, Grand casts a ceremonial vibe that imbues the music with an enticing sense of mystery.

There’s an enigmatic braininess to Reciprocity that prevents it from being easily digestible or catchy. Nevertheless, the music possesses an emotional allure that increases with repeated listening.