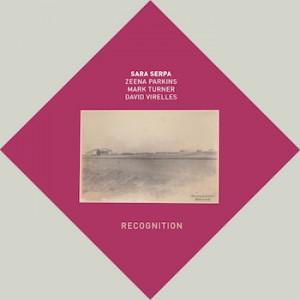 There’s always the temptation when reviewing a soundtrack album to temper one’s sense of the music by how well it serves the images. In hopes of avoiding that, I spent a week or so getting to know the music on Recognition before taking a peek at the film, and I’m glad I did.

Recognition, both the film and album, is about Portuguese colonialism in Angola. Its images come courtesy of Super-8 film shot in 1961 by vocalist Sara Serpa’s grandfather, and the conceptual framework derives from the bandleader’s own critical reading of Portuguese and Angolan history. The story is finessed into a compelling narrative by director Bruno Soares.

Although it lacks the detail of a true documentary, Serpa frames its home-movie details with damning clarity, making the cost of colonialism painfully clear. The music isn’t quite as specific, in part because Serpa’s approach to jazz singing lets melody and phrasing do the work that words accomplish for other singers. But it’s just as powerful.

Her compositions are lean and quiet—with a definite pulse, but little in the way of jazz groove. “Free Labour,” for instance, makes its point with cycling rhythms that recall Steve Reich, while “Mercy And Caprice” shifts between a relentlessly simple thrum and an almost impressionistic rubato. Her melodies are flowing and intervallic, with an occasionally eerie quality that’s amplified when she sings in unison with Mark Turner’s tenor, as on “Lei Do Indigenato, 1914.” As for the spoken-word pieces, even without the historical context, the emotional power of “Beautiful Gardens” or “Queen Nzinga” makes the message of Recognition impossible to deny.