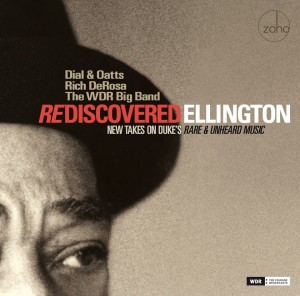 An online search for CDs and LPs by Duke Ellington (1899–1974) that are available at Amazon can yield more than 5,000 products. The abundance of original recordings and interpretations of Ellington’s work is one of the reasons why the subtitle of one new album is so intriguing. Pianist Garry Dial, reedist Dick Oatts, orchestrator/conductor Rich DeRosa and the 16-piece WDR Big Band of Cologne, Germany, have collaborated on a studio album titled Rediscovered Ellington: New Takes On Duke’s Rare & Unheard Music. As Dial explains in the liner notes, during the late 1970s, Ellington’s relatives hired him “to record, in alphabetical order, the entire Tempo Music catalog of Duke’s music and his associates’ for their family archive.” For a period of about three months, Dial visited the home of Duke’s sister Ruth five days a week so that he could study the contents of the archive, play the compositions on piano and record them for posterity. The archive contained everything from scores and published lead sheets to just sketches of tunes. Dial retained a copy of all the pages he prepared for the Ellington family archive nearly 40 years ago. And that treasure trove inspired him to create this new album of big-band music. One need not be an Ellingtonia expert to enjoy these terrific tunes. But hardcore fans will be thrilled to hear numbers such as “Introspection” and “Kiki,” for which there are no known previous recordings. Frequent collaborators Dial and Oatts contribute potent solos throughout the nine-song program. Dial’s elegant touch is displayed on the gorgeous “I Like Singing,” and Oatts offers an alto sax solo brimming with soulfulness on “Let The Zoomers Drool.” On the latter tune (written by Ellington with his trusted alto saxophonist Johnny Hodges), Oatts’ intricate, tour de force solo includes a section of about 30 seconds when the WDR Big Band drops out entirely in order to showcase his painterly work. Overall, this program swings, wails and gets fine and mellow. The ballads are stunning, particularly “Love Came,” a tune that had been recorded in 1965. Oatts plays a dazzling flute solo on “Just A Gentle Word From You Will Do,” a song that the liner notes explain was mainly composed by pianist/arranger Onzy Matthews, who worked with the Duke Ellington Orchestra in the late ’60s and early ’70s. The WDR Big Band members also impress with their solos on this amazing album. Trombonists Shannon Barnett (“Zoomers”), Ludwig Nuss (“Gentle Word”) and Andy Hunter (“Introspection”) each deliver solos that reflect the player’s individuality while also contributing to the overall success of the performance; that’s something Ellington certainly would endorse. DeRosa—who is on the faculty at the University of North Texas and who has often served as conductor for the WDR Big Band—helped arrange all the music in this 77-minute program. He and Dial arranged six tunes, while he and Oatts arranged the three others. The result is a stellar big-band album, and a document that expands our understanding of Ellington’s genius.