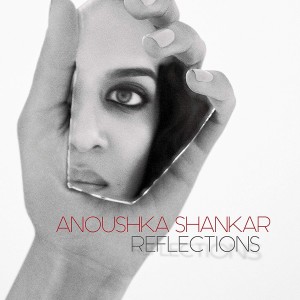 Sometimes, the long view offers the best perspective. Reflections compiles tracks drawn from 20 years of sitar virtuoso Anoushka Shankar’s recordings, and in so doing demonstrates not only the breadth of her work, but also its consistency.

Like her father, the legendary Ravi Shankar, Anoushka is a master of Hindustani classical music, but also open to working outside that tradition in various types of fusion formats. We hear her playing in a jazzy Americana style with her half-sister, Norah Jones, and also in the classical style with her father. There are collaborations with flamenco stars Pedro Ricardo Miño and Duquende, with Israeli pop singer Noa Lembersky and with actress Vanessa Redgrave. There are deep grooves, and tracks where the rhythm seems as fluid and unhurried as the water of a pond; there are songs with an obvious verse/chorus structure, and others that mostly are improvisation. Sometimes, the music seems modern and wide-screen, at others, it sounds timeless and intimate.

Through it all, Anoushka’s sitar remains constant—not just its sound, but the musical sensibility behind it. Like all truly great improvisors, she maintains her voice regardless of the material she’s playing, or with whom. This especially is evident when she leaves the Hindustani tradition to wander the wilds of world-music and pop. In some cases, it’s a matter of adapting her technique to the vocabulary of another music, as she does on the flamenco tune “Buleria Con Ricardo,” where she manages to make the melody’s Andalusian ornamentation sound perfectly at home on sitar. But she’s also able to discover an idiomatic role for herself that previously didn’t exist, as on “The Sun Won’t Set,” where Shankar uses the sitar’s lower register to play the blues, sounding a bit like a dobro against Nitin Sawhney’s finger-picked folk guitar. And it’s that sort of playing that quietly reminds us that this is one of improvised music’s great players.