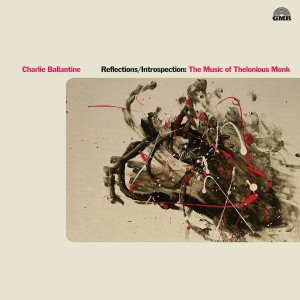 Unfolding with a dreamy version of “Reflections,” Indianapolis guitarist Charlie Ballantine’s Reflections/Introspection: The Music Of Thelonious Monk is a collection of Monk standards, played with a touch of ginger and layered with enough reverb to tickle any surf guitar enthusiast’s fancy.

“Bemsha Swing” captures a suggestion of a swaying island groove transmitted through the drumming of Chris Parker, in fact, according to KUVO: “Bemsha comes from the word ‘Bimshire’ or ‘little Bimshire,’ a nickname for Barbados, where [the song’s co-writer] Denzil Best’s family originated.”

Ballantine’s version of “Ugly Beauty” captures the lovely lilting swing of the original, but somehow misses the off-kilter dissonance encoded in Monk’s masterwork (i.e., the prized crooked smile). Meanwhile, his “Green Chimneys” softens the angularity of the original, perhaps bearing more similarity to Wynton Marsalis’ interpretation of the tune. “Pannonica,” on the other hand, is a fitting tribute to the baroness who served as the cut’s namesake. It’s a romantic, though brief, love call in the mode of Monk’s revisitation laid down on Thelonious Alone In San Francisco.

Compared with Ballantine’s 2018 tribute album Life Is Brief: The Music Of Bob Dylan, this record lacks a certain punch (“The Times They Are a-Changin’” is worth the price of admission there), but with such heavy hitting material and apt musicianship, it’s hard to stray into mediocrity. Consequently, this album is a lengthy yet lean pleaser.