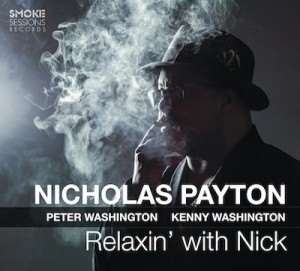 Almost in the middle of Nicholas Payton’s new two-disc set, he delivers a sterling musical manifesto, “Jazz Is A Four Letter Word,” which he initiates with a Fender Rhodes ostinato that’s soon parroted by bassist Peter Washington.

As the song begins, Payton explains to the audience assembled at New York’s Smoke Jazz & Supper Club that the tune was inspired by a book that drummer Max Roach was working on before he died. As the tune progresses, the bandleader layers in prerecorded dialogue of Roach explaining why he viewed the word “jazz” as a pejorative that lessened the excellence of black American musicianship. Payton later sings the title in an urbane style that recalls ’70s iconoclast Gil Scott-Heron.

It’s a work that connects late-20th century soul and modern hard-bop, the song demonstrating Payton’s acumen on the acoustic piano, as he unravels a punchy improvisation before moving on to trumpet—the instrument he’s most renowned for—and blows tart-flavored melodic passages.

While moving from trumpet to keyboards on “Jazz Is A Four Letter Word,” the bandleader also engages in some antiphonic banter between the two instruments that shows a keen awareness of nuanced phrases and restraint. In lesser hands, it would have devolved into a circus act. But with Payton leading a trio—which also includes drummer Kenny Washington—hokeyness is kept at bay. And from a sociopolitical standpoint, it shows that Payton hasn’t let up on his campaign, beginning roughly in 2011, to obliterate the word “jazz” in favor of “Black American Music.”

Payton’s BAM crusade became a polarizing topic for much of the decade, and it also sometimes threatened to overshadow his expansive musicianship. But as that aforementioned song—and the rest of this date indicate—he’s lost none of his musical ingenuity, subversive humor or reverence for history.

The trio intermingles some of Payton’s more recent originals—like the pneumatic “C,” on which he lays down an elegant piano motif that would make Ahmad Jamal smile, and the jaunty “F (For Axel Foley),” where he spars with Kenny Washington’s jabbing drum accents on the Fender Rhodes and electric keys—with inventive makeovers of Benny Golson’s “Stablemates” and Victor Young’s “When I Fall In Love.” On the latter, Payton showcases his vocal talents by unraveling the melody in a whispery manner that glides across the glacially paced arrangement, resulting in bewitching splendor.

The sanguine nature of these May and June 2019 recordings is a sly show-and-prove tactic. And except for “Jazz Is A Four Letter Word,” BAM’s underlining sociopolitics don’t scream too loudly.

Say what you will about Payton’s polemics, there’s no denying his artistry.