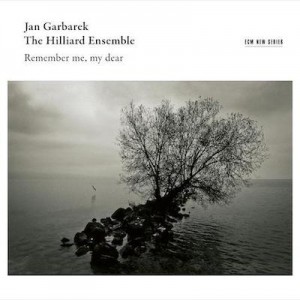 Twenty-five years ago, Norwegian saxophonist Jan Garbarek co-released an ECM album, Officium, with The Hilliard Ensemble, the highly regarded British vocal group that specializes in early European music. It was an unexpected hit, and one of the most profound recordings the 72-year-old Garbarek—who has played with Keith Jarrett and George Russell, among other luminaries—has made. His soprano and tenor saxophones blended seamlessly with the four-person vocal ensemble, creating an eerily beautiful, almost sacred sound. Since then, Garbarek has collaborated with the group three more times, including on Remember Me, My Dear, recorded in 2014 at a church in Switzerland.

This album is their last together, as The Hilliard Ensemble has since disbanded. And because it was recorded in a church, the sound is echoey and diffuse, qualities that help Garbarek, playing soprano, harmonize with the ensemble on a textural, as well as a harmonic level. The music certainly casts a spell, beginning with Garbarek’s haunting solo introduction on “Ov Zarmanali,” the first track.

The album—mostly including selections from the previous collaborations—moves along in slow, careful motion, like a creeping fog, except for “Alleluia Nativitas,” which feels a bit like a jig and on which Garbarek gets bluesy. Still, for the most part, things stay stylistically the same, and Remember Me, My Dear in many ways feels like one unending melody that will continue on, despite the group having played its last song.