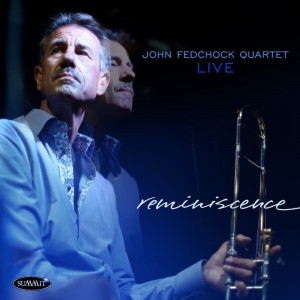 Now, Fedchock and company have followed up Fluidity with what’s being billed as its sequel, and it’s a peppy joyride worthy of its predecessor. Dubbed Reminiscence, and made up of a hodgepodge of standards and originals captured live during a three-night run at Virginia Beach jazz hub Havana Nights, the recording displays both an intimate rapport and raucous feel.

Over seven compositions, Fedchock’s inviting blend of scintillating tone, ear-wormy hooks and bouncy bop romps are met with wild applause that pull the listener inside the club. From the program’s spirited, jazzed-up get-go on the Fedchock original “The Third Degree,” the quartet (save “Brazilian Fantasy,” another Fedchock number) are ostensibly deep in a telepathic zone, their built-in chemistry palpable from decades of playing together. Running the gamut from red-hot chugging blues (Fedchock’s “Loose Change”), heartstring-tugging balladry (a Latin-tinged take on trombonist J.J Johnson’s “Lament”), to spunky bop (a cover of the 1950s standard “The End Of A Love Affair” by Edward Redding), Reminiscence, which also includes standards by Harry Warren and Tadd Dameron, is as breezy and laid-back as the Virginia beach the set was recorded near. It’s a conversational back-and-forth that swings with abandon, spritzed with improvisational touches.