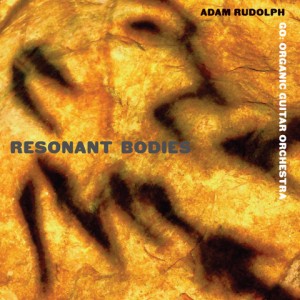 Resonant Bodies is the 12th release in master percussionist and world music pioneer Adam Rudolph’s series of recordings with Go: Organic Orchestra, his long-running concept for a new, globally based creative music ensemble. Previous recordings in the series, which Rudolf began developing in 2001, feature a variety of instrumental configurations of varying sizes. But for Resonant Bodies, Rudolph envisioned an entirely new kind of ensemble experience: a nine-piece guitar orchestra consisting of some of New York’s finest and most adventurous players: Nels Cline, Liberty Ellman, David Gilmore, Miles Okazaki, Joel Harrison and Kenny Wessel on electric guitars and effects; Marco Cappelli on acoustic guitar and effects; Jerome Harris on electric guitar and electric bass; and Damon Banks on bass. The recording is a document of the group’s final performance from its 2015 tour, the culmination of a perpetually evolving shared experience. Each guitarist brings his own voice and phraseology to this egalitarian effort under strict instructions from conductor Rudolph to “not think like a guitarist.” The leader sought to discourage his virtuosic players from relying on instrumental technique, instead encouraging them to seek soulful and creative sounds. “I asked them … to imagine they were playing an oboe, or were singing, or a Moog or a flock of birds,” he explained. “The idea was to have the music transcend the idea of thinking a certain way that the technique of playing a particular instrument can sometimes encourage. I think we succeeded.” They do indeed succeed, and the result is completely organic music that’s profoundly original, strikingly powerful and dialog-driven. It resonates with electric-acoustic energy and buzzes with aliveness. Go: Organic Guitar Orchestra is a natural evolution for Rudolph’s futuristic orchestral vision. The music asks to be heard on its own terms; its unprecedented sounds and in-the-moment formulations invite the listener to set aside any preconceived ideas and expectations, and the rewards are immense.