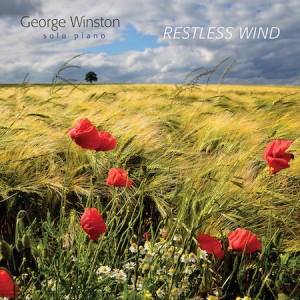 Pianist George Winston always will be best known for leading the 1980s New Age movement. The idiom essentially was dedicated to mood, using repetition, space and subdued playing that often arrived at something akin to background music.

Restless Wind finds the pianist performing interpretations of others’ material, contributing two of the 13 songs here. The music is thoughtful and sometimes taken out of tempo, but not quite as sleepy as some of his New Age-era works. Winston’s “Autumn Wind (Pixie #11)” utilizes a repeated left-hand pattern, while his right improvises in a bluesy fashion. There’s some barrelhouse piano on “Judge, Judge,” soul on “A Change Is Gonna Come” and a dreamlike atmosphere on “Summertime.” Of the other performances, the most interesting are the 1915 Mexican folk song “Cancion Mixteca (Immigrant’s Lament)” and the hymnlike treatment given to Mark Isham’s “The Times Of Harvey Milk.” A medley that begins with the Dixieland standard “Muskrat Ramble” moves into Country Joe McDonald’s “I Feel Like I’m Fixin’ To Die Rag” and then Winston’s own maddingly repetitious “Stop The Bleeding.” It’s difficult to sit through. Restless Wind is a mixed bag, and maybe not restless enough.