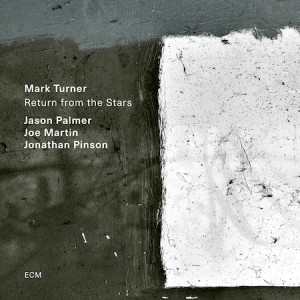 Mark Turner’s writing for his quartet on Return From The Stars, his latest ECM leader date, provides ample space for spontaneous ensemble interplay within its arc of expression. Solos flow organically in and out of Turner’s arrangements, which, in their sparseness, consist of little more than written-out horn lines for himself (on tenor) and trumpeter Jason Palmer, and less specific instructions for his rhythm section of bassist Joe Martin and drummer Jonathan Pinson. The absence of a chordal instrument leaves the conversational possibilities wide open as Turner’s compositions modulate between sections of structure and looseness. There is a narrative tension at work that juxtaposes themes of freedom and responsibility, making for an exhilarating listen, even during the album’s more measured, quieter moments. Indeed, a dignified drama of sorts plays out on Return From The Stars, which takes its title from a Stanisław Lem sci-fi novel about an astronaut who returns from a space mission to find life on Earth greatly changed, and his own values out of step with society. Turner draws upon his deep study of the various ways history’s jazz masters have dealt with changes both musical and cultural, incorporating a wide range of stylistic elements into his arrangements and improvisations, and reminding listeners that, in his musical world, nothing is off limits. His first quartet album since 2014’s Lathe Of Heaven (ECM), Return From The Stars documents Turner’s artistry as a premier saxophonist, conceptual thinker and bandleader who plays a visionary role on today’s rapidly evolving, ever-expanding jazz scene. A 180g vinyl version will become available in autumn.