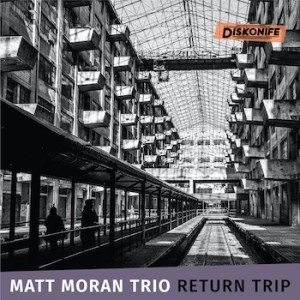 Vibes and organ, both endowed with ultra-rich timbres, are an unusual pairing, almost a sonic indulgence, which Matt Moran and Gary Versace, respectively, refine on their second album with drummer Tom Rainey. Return Trip is a bit more diffuse, its songs less immediately defined than on 2018’s Play Ball. But the two albums are of a piece—quirky, mood-shifting, surprising, honestly engaged.

Although very open, the music here is not completely free—except perhaps for “Sometimes That’s OK,” which gradually heats to a controlled boil. Yet the structural bits of the ensemble’s forays are sketchy; Moran’s meandering line in “Ripples,” his repeating pattern for Rainey to strike against as an intro to “Spring.” The nicely developed melody of the latter is an exception, and “Effish” has deceptively conventional elements, too. More important than the repertoire are the ways Moran’s hard metal strokes glint and his lyrical gestures gleam against Versace’s spongy chords and bass pedal ostinatos, while Rainey connects with them both. The sound is enveloping, but not loud; angularity and dissonance are embraced, but not flaunted. These musicians trust the processes and results of discovery; they take unexpected turns and happily expand on subtle grooves. Return Trip is dark, but that’s more about mystery than gloom.