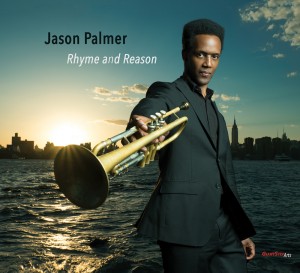 Jason Palmer doesn’t shy away from pointing out the direct influences that inform his work. It’s a quality most jazz players already exhibit, but this trumpet player does it better than most.

The liner notes for his latest album, Rhyme And Reason, walk listeners through each of the eight songs on this double-CD set, from the way he stitched together elements of songs by August Greene and Herbie Hancock to help create opening track “Herbs In A Glass” to transposing the Mark Turner song “Jacky’s Place” up a 5th and shifting the time signature to build out “Mark’s Place.”

Those details aren’t essential to the enjoyment of this fantastic live recording captured in June 2018 at New York’s Jazz Gallery, but having them available provides a strange kind of reassurance. It’s nice to know how much thought and work went into each composition. And it makes for a much more active listening experience, trying to connect the sputtering rhythms and the swashbuckling solo by Turner on “Sadhana” to the “discipline of routine spiritual practice and the routine surrendering of the ego ... .”

But the music is more whirling dervish than quiet reflection.

Even with just the tracks and no further information, Palmer’s tunes, his inventive and dauntless playing, and the equally spirited work of his sidemen are more than enough to draw listeners in. All of that comes down to the discernible connection that these four performers have with one another. They’ve been making music with one another in various ensembles and permutations for years (two decades in the case of Palmer and drummer Kendrick Scott). A shorthand and a comfort level has been established, allowing them to strain and stretch a little more than they might otherwise.

The live setting certainly helps out on that front, too.

Scott and bassist Matt Brewer have the most natural and obvious connection. The former is an inimitable player, splashing and rolling all over his kit, while leaving his rhythm-section counterpart plenty of room to work in a tight groove, adding barbed melodic flourishes. Fast-forward to the end of “Herbs In A Glass” to inhale the strongest dose of this via Scott’s footwork-inspired solo and Brewer’s bold punctuations landing between drum hits.

As strong as they are together and as soulful as Turner’s playing is, it’s Palmer who pulls the neatest trick on Rhyme And Reason. That can be as simple as a quick quote from “My Favorite Things” within “Waltz For Diana” or something far more complex, like the pealing runs that bound through “Kalispel Bay” and the tender bossa nova-like minimalism of “Blue Grotto.” Palmer has found another gear to his playing that is taking him and anyone who joins with him to greater, more glorified heights.