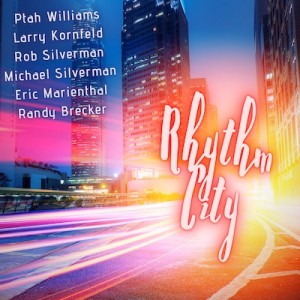 Rhythm City, an album from the eponymous St. Louis jazz stalwarts, is less an update and more a rearticulation of fusion. What began as a jam session at keyboardist Michael Silverman’s studio morphed into something larger when pianist Ptah Williams stopped by. As they started playing, they started recording, and Rhythm City was born.

It was their first time playing together, but the album evinces a real chemistry. Across a handful of Thursday morning jam sessions, the trio recorded more than 30 tunes; Rhythm City comprises eight of them. Unsurprisingly, it is Williams, a true virtuoso, who takes center stage on several tracks. The first tune they recorded was the Freddie Hubbard classic “Little Sunflower,” where Williams offers a driving solo announcing the group’s presence. But there are other moments where Williams—whose first name, Ptah, is from the Egyptian deity responsible for creation—provides the integument for his bandmates. In their rendition of Wayne Shorter’s “Virgo Rising,” Williams brings us along forcefully and slowly, as if the tune is being transmuted into a ballad. But then the intensity of Silverman’s playing and the consistent pacing of Larry Kornfeld’s electric bass summon both reprieve and resolution.

On the only original piece, “Just Like Us,” Eric Marienthal’s soprano saxophone and Randy Brecker’s trumpet provide a glimpse into how a more crowded session might have sounded. In the future, we could still get to hear more of that originality. But if the cover of Curtis Mayfield’s “Pusherman” is representative of what is to come, there is much to anticipate in Rhythm City’s reinterpretation of music that covers all of jazz and the worlds beyond.