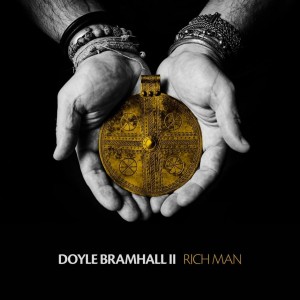 Guitarist and vocalist Doyle Bramhall II is well known within blues–rock circles, even though is discography as a leader is rather scant. Rich Man is his first solo album since the 2001 disc Welcome. Over the course of his fruitful career, Bramhall has worked with Eric Clapton, Buddy Guy, Dr. John and the Tedeschi Trucks Band, with whom he has some aesthetic similarities. Now a veteran producer, Bramhall has reached the point where he has the skill set to do exactly what he wants in the studio. He wrote or co–wrote 12 of the disc’s 13 tracks, produced the album, provides lead vocals as well as some harmony vocals, and plays acoustic and electric guitar, bass, drums and percussion. But this is no one–man–band effort. To achieve his ambitious vision, Bramhall enlists numerous musicians, including his working band (Adam Minkoff, Anthony Cole and Ted Vecchio). There’s also a long parade of guests and collaborators, including Norah Jones, who adds lovely vocals to “New Faith,” guitarists Binky Griptite and Joe Crispiano (both members of Sharon Jones & The Dap–Kings), James Gadson (drums), Jon Cowherd (pump organ), Tim Lefebvre (bass), Kofi Burbridge (Hammond B–3) and Michael Eaton (tenor saxophone, flute), along with a string section (violin, viola and cello). Bramhall offers plenty of impressive blues–rock and stinging electric guitar work in this diverse 73–minute program, but it is his exploration of world music—including African, Arabic and Indian elements—that makes this album so memorable. The spiritual lyrics to “My People” are augmented by a powerful sonic wave with droning elements that come courtesy of Devdutt Joshi on harmonium and Ustad Surjeet Singh on sarangi, a bowed string instrument. Bramhall’s travels in Mali and Morocco partially inspired the instrumental “Saharan Crossing,” which features Yuval Ron playing the oud. The album concludes with a potent rendition of Jimi Hendrix’s “Hear My Train A–Comin’,” a nod to Bramhall’s deep roots in the blues. Bramhall dedicated this album to his late father (after whom he is named, thus the II following his surname). His father, who died in 2011, was an esteemed drummer who worked with guitarist/vocalists Jimmie Vaughan and Stevie Ray Vaughan.