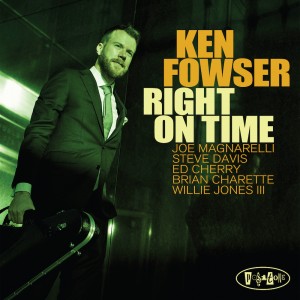 Tenor saxophonist Ken Fowser’s latest is a pleasantly rollicking, worn-in effort. No one’s reinventing the wheel here on these straightahead jams, but that’s not necessarily the point.

Grooves are the trenches over which Fowser floats, with Ed Cherry ably keeping order on rhythm guitar, as Willie Jones III sits behind the kit. Functioning more as a rudder for the group than as an additional melodic element, Brian Charette’s organ seems to be as much a leader as Fowser’s tenor, which occasionally finds itself subsumed in the horn section. It’s all a seemingly balanced recording, but something elemental about the instruments and arrangements just throw things out of whack a smidge.

“No Filter” is a good ride for all involved, coasting along gently with each player getting in a solo—and pulling them off. “Don’t Let Life Pass You By” is a gentle little ballad, but one might think Fowser would take more of the lead on a song like “Fowser Time” that uses his own name.

This isn’t to say the album doesn’t cut up at all. By closer “Knights Of The Round,” Jones contributes a drum solo so rambunctious, listeners might wonder where that vibrancy was during the previous 50 minutes.