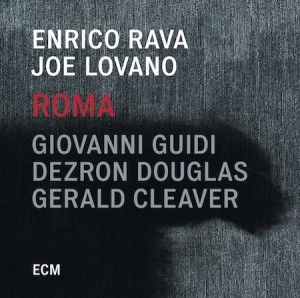 Trumpeter/flugelhornist Enrico Rava and reedist Joe Lovano are well matched master instrumentalists. Their voices hold interest even when dispensing entirely with convention. If temperamentally compatible, they still present contrasts, each projecting their own cast of rangy, lyrical self-expression on this November 2018 concert recording. The first two pieces are Rava’s, “Interiors” being an ornate line that he stretches to a lonely place, leaving climaxes unplayed and muffling notes before a heroic run. On “Secrets,” he’s punchier, going ultrahigh and way down low; Lovano picks up where he leaves off, sans theme. “Fort Worth” is, by comparison, celebratory, and has the best passages of the frontmen sparing: From an unfocused start, bassist Dezron Douglas sets a strong walk, drummer Gerald Cleaver kicks, pianist Giovanni Guidi comps and Lovano locks in so strongly that when Rava enters, he’s as eager as Miles after Trane’s turn—and just as capable. Guidi’s solo jumbles ideas, but Lovano remains energized. He and Rava swap licks, overlap, urge each other on and end in accord. For the final track, Lovano blows his tarogato, a straight horn, in a freewheeling intro before segueing into Coltrane’s “Spiritual.” Rava riffs at his side, finally stepping out with burnished ease, snap and heft.