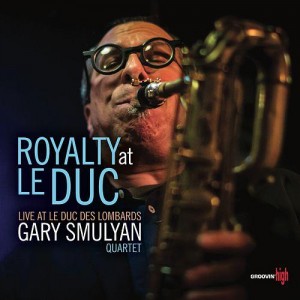 Recorded live at the Paris jazz club Le Duc des Lombards during baritone saxophonist Gary Smulyan’s fall 2015 European tour, this highly recommended album was originally released last year on the Groovin’ High label and is about to benefit from a new U.S. distribution deal with Sunnyside. Smulyan, who topped the Baritone Saxophone category of the 2016 DownBeat Critics Poll, has done exemplary work anchoring the reed sections of some of the country’s top big bands. But here, fans can hear today’s top bari sax practitioner stretch way out on long, adventurous bebop solos and wail tenderly over slow progressions in quartet session that features the fine rhythm section of French pianist Olivier Hutman, Italian bassist Michel Rosciglione and Austrian drummer Bernd Reiter. From his first solo on the opener, Thad Jones’ “Thedia,” Smulyan gets right down to the business of demonstrating why he’s regarded as the beboppingest bari player to come along since Pepper Adams. He tears through the changes with urgency and glee, his voice robust and commanding throughout the nearly 13-minute romp. The quartet shifts gears dramatically on the following track, Billy Strayhorn’s ominously beautiful “The Star-Crossed Lovers.” Smulyan simultaneously channels his inner Johnny Hodges and Harry Carney as he scales the impassioned heights and plumbs the desperate depths of one of jazz’s most challenging, heart-wrenching ballads. The bebop spirit resumes with Adams’ “Cindy’s Tune,” which opens the door to strong, well-developed solo spots from Rosciglione and Hutman before Smulyan sets out on an extended ride on the big pipe and proceeds to engage in some playful trading with Reiter. A light swing feel emerges on Joe Henderson’s “Serenity,” drawing out Smulyan’s innate lyricism and showcasing the tasteful chops of Rosciglione, Human and Reiter. The quartet burns long and hard on Jones’ “Elusive,” reveals its romantic side on David Raskin and Johnny Mercer’s famous movie ballad “Laura,” and closes the program by applying a refreshing medium-tempo spin to the standard “Body And Soul.” The audio quality of this live session is outstanding, thanks to the work of Swiss producer Jacques Muyal. Royalty At Le Duc is a substantive and entertaining program, well deserving of the wider distribution it will enjoy in 2017.