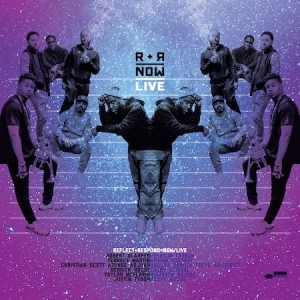 Incorporating a blend of compositions from its 2018 debut, Collagically Speaking, and fresh imaginings of other compositions, this new live recording documents an R+R=Now residency at New York’s Blue Note club.

The first track, “Respond,” is at once a rallying call and a declaration of intention, serving as a sonic impression of cascading skyrockets. Christian Scott aTunde Adjuah’s plaintive trumpet calls out through the filter of a flanger, bolstered by Justin Tyson’s slow-bubbling drum march. Taylor McFerrin’s synth lines, reminiscent of classic 1980s Herbie Hancock, snake through the track, which rolls directly into a version of “Been On My Mind.”

Keyboardist Robert Glasper says that R+R stands for “Reflect and respond,” echoing Nina Simone’s sentiment that “an artist’s duty, as far as I’m concerned, is to reflect the times.” In an interview with her then-husband Andy Stroud, she continued, “[A]t this crucial time in our lives when everything is so desperate, when every day is a matter of survival, I don’t think you can help but be involved.”

A smoldering spirit of survival permeates the album, and Adjuah notes that the band is composed of Black men from less than affluent backgrounds, declaring that “we’ve had to go through some hell, fight for some things, build up a lot of armor, and do a lot ourselves to forge our realities, to become who we are.” He adds, “We’re all very aware of that, so anytime we get together, it’s a celebration.” Recorded back in 2018, R+R=NOW Live is proof of such a celebration, released at a time when we need it most.

Flange effects—an integral tool of 1970s disco DJs—are buried throughout the mix here. Effects in general are a crucial, textural element on the album, supplying the music with a Day-Glo haze.

The ensemble’s cover of Kendrick Lamar’s “How Much A Dollar Cost” (co-written by keyboardist Terrace Martin) is intentionally jarring, devolving then rebuilding itself midway though and settling into an infectious groove. “Change Of Tone” opens up with chord washes that bring to mind Kool and the Gang classic “Summer Madness,” making way for ARP-ish synths that sound downright inquisitive. The polyrhythmic gasps on the track are refreshing, creating tension between Glasper and Tyson, juxtaposed with a peaceful coda. “Perspectives/Postpartum” (a medley of compositions written by McFerrin and Adjuah, respectively) delights: Adjuah’s synthy dream waltz explodes into McFerrin’s climax. The rhythmic backbone of “Need You Still”’ is reminiscent of Glasper’s “All Matter.” And “Resting Warrior,” the 25-minute culminating track, is amplified by thumb piano, utilizing an ancient instrument to further tie the past to the future on an album that’s as much about now as it is about tomorrow.