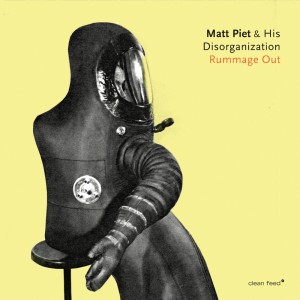 The creative set in Chicago always has both benefited and suffered from its lot of being planted between New York and Los Angeles.

Improvising pianist Matt Piet’s work, firmly rooted in the lineage of the city’s creative music, is buoyed by its clear allegiance to the jazz tradition, while slyly insinuating the bandleader’s grounding in classical music.

Split into two extended tracks, Matt Piet & His Disorganization open Rummage Out not with some searching piano, but the ringing of a bell on “Lost & Found.” There’s empty space there, as members of the quartet pry open the possibilities of their instruments. As the ringing ebbs alongside the whinnying of Josh Berman’s cornet and Nick Mazzarella’s alto saxophone, the quartet, which also includes stalwart percussionist Tim Daisy, lands on something just this side of spiritual jazz, tinged by Piet’s bouncy chording.

What’s as remarkable as the music here is that Piet’s most frequently been found performing as a member of Four Letter Words or heading up a trio of his own making. The confluence of newly discovered musical interests found here amid a lineup of some of Chicago’s best jazz-adjacent performers speaks to Piet’s vision, as well as his ability to seamlessly move through the genre’s most adventurous strains.