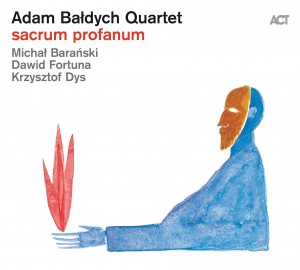 Polish violinist Adam Bałdych goes where the muse leads him. On each of his recent ACT albums recorded with the Helge Lien Trio—Brothers (2017) and Bridges (2015)—Bałdyc composed almost the entire program. In the liner notes for his new quartet album, Sacrum Profanum, Bałdychh reminisces about being expelled from music school “for playing jazz, for improvising and for rebelling against classical music.” But then he explains the impetus behind the new disc: “I felt the imperative to connect with my greatest inspiration at the moment—classical music.” But he’s not talking about Bach, Brahms and Beethoven. The 10 tracks on Sacrum Profanum are split evenly between original tunes and works by a diverse assemblage of composers that includes Hildegard of Bingen (1098–1179), Thomas Tallis (1505–’85) and Gregorio Allegri (1582–1652). Bałdych also interprets “Bogurodzica” (a piece from the 13th century) and the “Concerto For Viola And Orchestra” by contemporary Russian composer Sofia Gubaidulina.

Although the selections here jump from century to century, the leader’s decidedly modern, “new music” aesthetic keeps the proceedings cohesive. Bałdych has recruited a crew of flexible players—pianist Krzysztof Dys, bassist Michał Barański and drummer Dawid Fortuna—who excel at spare, poignant arrangements, as well as dense tracks packed with sonic layers. There are plenty of moments of thorny aural angst here, but on the version of Tallis’ “Spem In Alium” and the original “Longing,” Bałdych offers sections with gorgeous, clean violin lines. It’s lovely evidence that his youthful rebellion against classical sounds certainly was not a permanent, wholesale rejection.