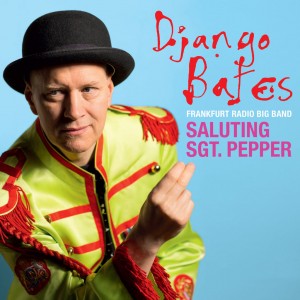 A skeptical raised eyebrow could be proper, hearing of Django Bates’ new Saluting Sgt. Pepper, timed with the pop masterpiece’s 50th birthday hoopla. But Bates’ superlative musicality and witty, creative vivacity should keep fear at bay, and after one good listen (and growing with each successive spin), it becomes clear that the distinctive keyboardist-composer-conceptualist has managed a remarkable feat: creating possibly the best “Beatles-meets-jazz” effort to date.

Built on a delicate balance of reverential fidelity to the original and plenty of personalizing elements—sometimes in wild kaleidoscopic schemes—Bates’ Salute is just that, plus a kick in the pants and an appeal to the cerebrum. He grants himself license according to the discrete flavor of each Pepper song, starting with a “Sgt. Pepper’s Lonely Hearts Club Band” refitted with 5/4 measures and a crazed sonic pageantry. “Lucy In The Sky With Diamonds” is suitably swathed in psychedelia, woozy tempo fluctuations and thickening harmonic plot, while “When I’m Sixty-Four” emerges initially groggy and then settles into a rubber-legged groove.

Funk playfully cross-breeds with swing on “Lovely Rita” (savoring the suspended chord coda). But he respects the innately experimental nature of “A Day In The Life”—up through Paul’s idea of a cathartic orchestral crescendo—treading lightly with his arrangement, but then adds a zany extra coda section at the end, for good Bates-ian measure.

I think George Martin and the boys would approve.