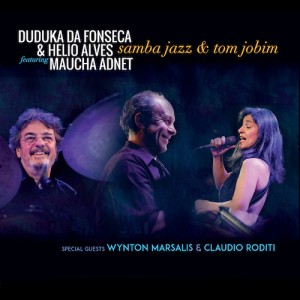 In the late 1950s, Brazilian guitarist João Gilberto and pianist/composer Antônio Carlos Jobim—or Tom—revolutionized American music with the introduction of bossa nova and samba into the jazz lexicon. And America’s love affair with these lyrical rhythms never has abated. In fact, we continue to discover more about these innovators and their influence through albums like Samba Jazz & Tom Jobim.

Three Gilberto/Jobim devotees—drummer Duduka Da Fonseca, pianist Helio Alves and singer Maucha Adnet—form the creative team behind this release, which draws from the trio’s show of the same name, presented annually since 2007 at Dizzy’s Club Coca-Cola. An even mix of vocal and instrumental tracks, the album showcases Adnet on all of the Jobim titles and two powerhouse trumpeters on two of the non-Jobim pieces: Claudio Roditi on his own high-velocity samba, “Gemini Man,” and Wynton Marsalis with a more straightahead take on Raul de Souza’s “A Vontade Mesmo.”

Adnet, who sang with Jobim’s ensemble Banda Nova, upholds the bandleader’s legacy on a smattering of his well- and lesser-known bossas, among them the lusciously arranged “Dindi” and a lilting, flute-accented “Pato Preto.” Da Fonseca and Alves contribute their own originals: Alves’ dynamic “Untitled” and frenetic “Helium,” and Da Fonseca’s intriguingly outré “Alana.” These three modern tunes serve as a reminder that not all Brazilian jazz today is predicated on bossa and samba, and that what Gilberto and Jobim started still is unfolding all these years later.