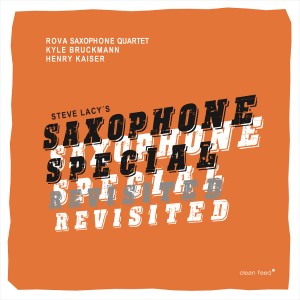 Rova Saxophone Quartet reinvents a classic recording by the late soprano saxophonist and composer Steve Lacy (1934–2004) on Saxophone Special Revisited. Lacy’s 1975 album Saxophone Special, culled from December 1974 performances at London’s Wigmore Hall, was a seminal entry into the pantheon of free-jazz works for saxophone quartet. It featured Lacy, Steve Potts, Trevor Watts and Evan Parker on multiple saxophones—plus guitarist Derek Bailey and synthesist Michel Waisvisz—bravely executing a suite of the leader’s densely arranged compositions that required them to dive head-first into extended group improvisations. The album—which was contemporaneous with Anthony Braxton’s saxophone quartet recording on New York, Fall 1974 and predated any works by the World Saxophone Quartet—was an inspiration to the members of Rova, who came together as a group in late 1977 (and whose personnel has remained the same, with one exception, ever since). A group known for its unique ability to synthesize modern composition with collective improvisation, not to mention its appetite for advanced techniques and raw adventure, Rova has performed its own arrangements of Lacy’s now-famous suite live on several occasions over the years. The quartet of saxophonists Bruce Ackley, Steve Adams, Larry Ochs and Jon Rasking is supplemented by guitarist Henry Kaiser and synthesist Kyle Bruckmann on Saxophone Special Revisited, which was recorded in September 2015 at Fantasy Studios in Berkeley, California. Although Rova’s interpretation is obviously not an attempt to re-create all the nuances of the original recording, the ensemble succeeds in achieving the same chiming tonality that Lacy strove for in his dissonant, cycling arrangements. In this context, with obvious reverence, Rova and company sculpt brilliant improvisations of melody and noise that are honest to the core and utterly free of restraint. This is thrilling, cathartic stuff. Two bonus tracks, “Clichés” and “Sidelines,” feature Rova’s spirited take on compositions Lacy recorded after the release of Saxophone Special.