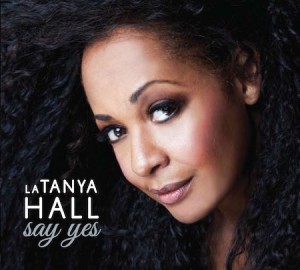 Given the 10 years since It’s About Time, one might fear a lack of artistic vision on La Tanya Hall’s follow-up, Say Yes. And to some extent, there is. Despite supporting other performers in the studio and working as an educator during the past decade, Hall never lost the drive to pursue a solo recording career. Still, the vacillation between conceptual adventurousness and performative safety here makes Say Yes a less immediately lovable experience than Hall’s warm and well-practiced voice might intimate. Melodies and lyrics from artists like Cannonball Adderley and Jon Hendricks alongside pianist Andy Milne’s arrangements shape many of the song selections. However, Say Yes also dips into the past, revealing an undeniable flirtation with poetry and music outside the traditional jazz canon; Hall takes on Joni Mitchell’s “The Fiddle And The Drum,” for example. The rendition here emphasizes the creative cohesion between the vocalist and Milne, while Clarence Penn’s clever percussion creates an illusion of ambient nature sounds. Unfortunately, the rest of the album doesn’t command the same sort of attention. And even as Hall never falters, Say Yes isn’t much more than a well-recorded—but tediously straightforward—studio session.