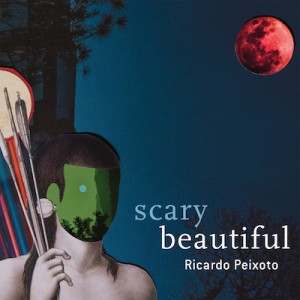 Veteran guitarist Ricardo Peixoto is poised to broaden his fan base with the elegant, all-original album Scary Beautiful, on which the Rio de Janeiro native (and current Bay Area resident) excels in solo, duet and full-band settings.

Peixoto’s discography includes work with the bands Terra Sul and the Berkeley Choro Ensemble, as well as Inverse Universe, a duo project with Brazilian vocalist Claudia Villela. On Scary Beautiful he plays acoustic and electric seven-string guitars and works with a set of top-shelf collaborators, including Paul McCandless (soprano sax), Harvey Wainapel (clarinet and bass clarinet), Marcos Silva (piano), John Santos (percussion) and Villela, who overdubs eight vocal tracks on the brief dreamscape “Nereids,” the only song here that isn’t an instrumental.

Nodding to Brazilian musical traditions, Peixoto offers a couple of songs in the baião style: “Santos E Demônios” opens with an ominous mood, perhaps fitting for the demons in the song’s title, and later is leavened by a flute solo from Bob Afifi. On the lively “Baião De Três,” Peixoto changes the traditional baião rhythm from 2/4 to 3/4 time, resulting in an earworm.

“Noturna” is a lovely solo guitar number, while “Simpática,” a guitar and piano duet with Silva, is based on the choro rhythm (which some jazz fans have heard clarinetist Anat Cohen navigate in her exploration of Brazilian styles). The samba “Morro Da Paixão” is a memorable hip shaker featuring horn arrangements by Luiz Brasil, while “Velha Amizade” is somewhat reminiscent of the gentle ocean waves lapping the shore that one experiences in classic Jobim tunes.

Peixoto has absorbed the musical traditions of his homeland and utilized them to create original compositions that acknowledge the past while moving toward the future.