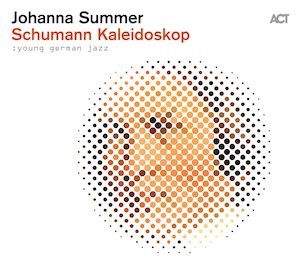 Johanna Summer built her unique ACT debut, Schumann Kaleidoskop, around the music of Robert Schumann. Initially drawing on pop and classical repertoire, Summer subtly moved closer to jazz with the realization that the motifs of the classical music she grew up with could be molded and expounding upon through jazz stylization and improvisational design.

Schumann Kaleidoskop is praiseworthy in its pursuit of merging genres; Summer’s meticulousness arrangements and performances are beautiful. She applies downbeat emphasis to the 16th notes during the beginning half of “Knecht Ruprecht–Träumerei.” And despite the slower tempo and wide melodic gaps in “Von Fremden Ländern Und Menschen,” Summer’s elongated variation unfurls like an emotive ballad, leaving ample room for notes to decay, contrasting with the stoic modernist writing.

Summer doesn’t leave elemental evidence of splicing together genres and she doesn’t hold listeners’ hands. And ironically, shrewdly straddling the Romantic era and the modern day is both the album’s biggest strength and weakness. Striving for creative heights at the cost of some approachability isn’t a bad thing, though.