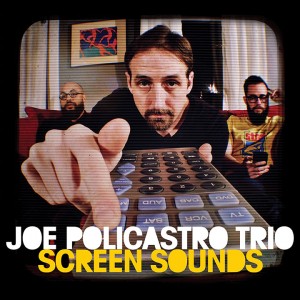 This highly original Chicago-based trio would seem to be seducing us with a collection of movie and TV themes, but, each a silver screen junkie, the musicians really are delving into a cultural cornucopia for their own amusement on Screen Sounds.

The opener, a fight song from a 1960 Akira Kurosawa film, is quite obscure and hardly, with Dave Miller’s guitar maximally distorted, easy listening. As a rapid mollifier, the band follows with the indelible and much-loved theme from John Schlesinger’s 1969 Midnight Cowboy, Policastro’s bass taking the opening refrain and the melody, then switching roles with Miller. The resourceful Miller knows well how to counterpoint his own pronouncements with antiphonic notes in opposing registers, and Policastro eventually recasts the melody arco-style as guitar initiates skank accompaniment.

Policastro insists there’s no overt irony at play, though Miller’s antics on “Nadia’s Theme” suggest the knowing post-noir aesthetic of Jim Jarmusch or David Lynch. He gets more jazzy, as does his swinging cohort, on “Cool Hand Luke,” the relaxed guitar architecture recalling Jeff Parker with the Chicago Underground Orchestra. Miller commands a painterly, archly quixotic, playful approach. And Avery’s talkative drums here somewhat recall Shelly Manne on Sonny Rollins’ Way Out West, as the leader moves toward more traditional support—until things open up at the end when Miller quirkily adopts a plucking style. The reverb laden “Summer Kisses, Winter Tears” becomes a lounge classic with Avery’s bolero beat, and Miller and Policastro’s backing vocals recalling the Elvis original. Vangelis’ delectably limpid and existential “Blade Runner” is rendered with kid gloves, save for a dark descent midway, culminating in a lovely vamp out.

This trio have refined their layered blend of the familiar and faintly far out, playing three nights a week at Chicago’s Pops for Champagne and through extensive roadwork. Their deep understanding of each other and deft analysis of choice repertoire repays repeat and close listening.