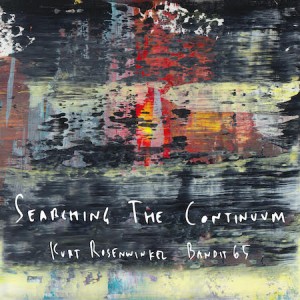 Because jazz remains a mostly acoustic music, the striking thing about guitarist Kurt Rosenwinkel’s new trio, Bandit 65, is how overwhelmingly electronic its sound is. Not only do Rosenwinkel and fellow guitarist Tim Motzer employ a wide array of tone-altering technology to expand their instrumental palette to near orchestral range, but along with drummer Gintas Janusonis, all three members are credited with “electronics,” a catch-all term that embraces all sorts of computer-based synthesis and sound-sculpting.

And fair enough, because large swatches of the album are given over to rich, coloristic soundscapes. “Sagrada (Madrid)” opens with a series of organ-like chords that are shadowed by all sorts of electronica, from rasping square waves to burbling arpeggios to tinkling ice crystals. The range of tones and textures are so deep and beguiling that it’s easy to get lost in the sheer lushness of the sound. Doing so, however, would be a bit like missing the forest for the trees, because the real genius of Searching The Continuum is that each of these tracks were spontaneously conceived of and recorded live.

Rosenwinkel and company aren’t simply composing on the spot, but orchestrating in real time. Listened to from that perspective, it’s hard to express how amazing this music is, as each track offers a cohesive logic that works both on a melodic/harmonic axis, as well as a timbral/orchestral one. Even if you adjust for the assumption that each track represents the best performance from disparate concerts, the overall achievement remains jaw-dropping, as if jazz improvisation just moved from two dimensions to three.