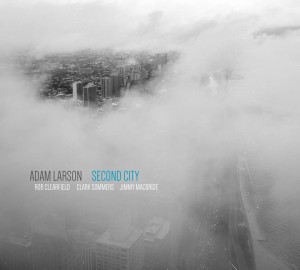 Though he hails from Normal, Illinois, 27-year- old Adam Larson’s saxophone skills are beyond the norm; he’s also a prolific composer. This is his fourth release under his own name, his second for Greg Osby’s Inner Circle Music.

The opener “Who Even Is at?” relates to the Bronx-based Larson’s presence on the competitive New York scene. It’s a fleet, punchy, demanding composition that sounds very much like New York jazz. With that said, bass ace Clark Sommers moved back to Chicago aer some years in the Apple, and in-demand keys man Rob Clearfield is a staple on the Windy City scene, where this date was recorded.
Sommers’ bulbous, decisive solo stems the tide on “Out The Window” before the voluble tenor digs in. “First Step” is a gem; precariously moored with a trip-step second-line beat from drummer Jimmy Macbride, it gloriously grooves and Clearfield goes on safari.
Larson has a tendency to write multifaceted themes that threaten to render the blowing redundant, but he corkscrews through the form here with tensile invention. Amusingly he confesses to initially thinking Nirvana’s “Smells Like Teen Spirit” was an Ethan Iverson composition, as he first encountered it in a Bad Plus iteration. Despite Macbride’s slap-happy drums here, Clearfield’s limpid Wurlitzer and the comparatively mellow Larson divorce this from the combative insolence of the grungy original.
You’d have to be a father to write a lullaby like “Sleep Now,” and the sighing long tones show welcome restraint from this fiery, virtuosic player who immediately segues into the intense, odd-metered “Perpetuity.” Another memorable highlight is the succinct, breakneck closer, “Breakout.”