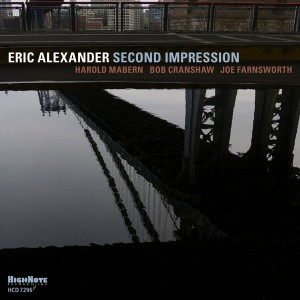 Since he began recording under his own name almost 25 years ago, tenor saxophonist Eric Alexander has led at least 15 sessions with double bassist John Webber and drummer Joe Farnsworth—frequently rounded out by pianist and mentor Harold Mabern (the respected pianist was a teacher for classmates Alexander and Farnsworth at William Paterson University).

Second Impression features Mabern, Farnsworth and, in what was likely his final recording session, bassist Bob Cranshaw, who was name-checked in the spoken-word introduction to the Alexander composition “Blueski For Vonski” on his 2014 Chicago Fire album.

The “second impression” may subconsciously be a nod to a trio of atypical tracks that feature Cranshaw on an electric bass guitar and Mabern on a Fender Rhodes that were both found in the studio, as the liner notes explain. Farnsworth’s funky “Jennie’s Dance” struts assuredly with an authoritative and somewhat surprising extended solo by the pianist on that cult-worthy keyboard.

Sammy Fain and Paul F. Webster’s “Secret Love” is buoyed by the partially electrified rhythm section. Alexander solos with elan while Mabern glides in another expanded exploration just prior to Farnsworth’s demonstration in rhythmic fluency.

The Wes Montgomery classic “Full House” closes out Second Impressions with flair; the bandleader’s spry tone matches the spirit of the piece, and Cranshaw seems to subtly propel the group forward with his note choices and reliable ease.