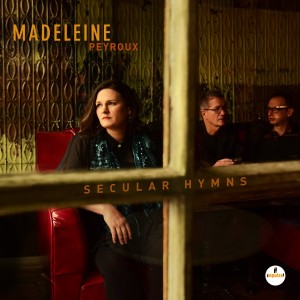 Madeleine Peyroux’s reputation is based on the understated passion of her singing. She doesn’t have to raise her voice to express the conflicted emotions that mark the human condition. She made this album with her touring group—electric guitarist John Herington and acoustic bass player Barak Mori—in an English church built in the 12th century. The wooden roof of the small cathedral brings a warm, natural reverb to Peyroux’s voice, lending these live performances a universal appeal.

Her quiet reading of “The Highway Kind,” Townes Van Zandt’s memo to a woman he may never meet, makes the lyric sound even more hopeless than Van Zandt’s weary original. Stephen Foster’s “Hard Times Come Again No More” is usually played at a tempo that alleviates its sad poetry. Not so here. Herington’s guitar adds blue, sliding, sustained notes that echo the crying tone of a steel guitar to support Peyroux’s somber vocal. She drops into her lower register to give the usually uplifting chorus a prickly, downward spin.

The trio includes a few uptempo numbers in the set. Mori and Herington slip into a reggae groove on Linton Kwesi Johnson’s “More Time.” Peyroux darts in and out of time, with Herington’s bluesy noodling giving things a little boost. The guitar and bass bring some low-key funk to “Everything I Do Gonh Be Funky (From Now On).” After her sultry delivery of the verses, Peyroux steps back to let her bandmates trade some buoyant licks. Rosetta Sharp’s “Shout Sister Shout” is the album’s most exuberant workout. A call-and-response between Peyroux and the boys underscores the song’s humorous put-down of male foibles.