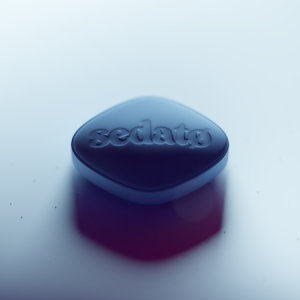 Separately, Tim Lefebvre and Jason Linder have yards-long CVs littered with names like Meshell Ndegeocello and the Tedeschi Trucks Band. Together, they’ve been recording with Donny McCaslin since the 2012, and backed David Bowie on his final LP, Blackstar. What do guys like that do when they want to cut loose?

They retreat to the studio with a sympathetic engineer, and make the electronica of their dreams. Their project’s name, Sedatø, derives from an inside joke involving a pilled-up dog they encountered at an Italian airport. It also serves to spoof their music, which is anything but sedate.

If one were to sum up the duo’s sound as a punch line, it might be, “What if Jan Hammer came out of retirement to jam with Boards of Canada on the soundtrack for the next Terminator movie?”

Lindner’s synth tones flicker like sodium lamps perceived through the fog, Lefebvre’s bass is smoggy with distortion, and their programmed beats stomp and sizzle. If electronic grime is your poison, they are behind the bar, dispensing generous pours.

Balancing the sonic grit are some irrepressible pop instincts. Each of this self-released, digital-only EP’s six tracks packs an unavoidable earworm. Some of their processed sounds are so vivid, they’re hooks unto themselves. And right when one’s senses start to dull from the onslaught, Lindner slips in a wistful keyboard melody.

However, Sedatø’s skillfully distressed surfaces are just that — surfaces. Like an overhopped IPA, they don’t leave you wanting more.