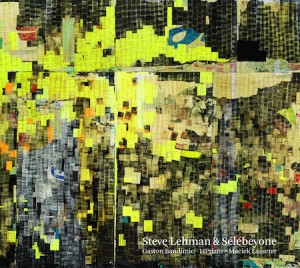 In the Senegalese language of Wolof, the word “sélébéyone,” which inspired the title of saxophonist Steve Lehman’s new album, means “intersection,” or a place where two things meet and are transformed anew. It’s an apt descriptor for this novel project, which unites voices from avant-garde jazz, electronic music, underground hip-hop and Senegalese rap under the banner of intrepid musical experimentalism. In overseeing this hybrid venture, Lehman—who topped two Rising Star categories in the 2015 DownBeat Critics Poll—joins a movement of musicians who are expanding the conversation between jazz and hip-hop, a venerated crew that includes artists such as Kamasi Washington, Thundercat and rapper Kendrick Lamar. But onSélébéyone, Lehman takes the concept a step further, crafting a deeply nuanced sonic tableau in which the lyrics by rappers HPrizm (a stalwart of the New York underground hip-hop scene) and Gaston Bandimic (an ascendant Senegalese rap star) govern the album’s sound design, resulting in an aesthetic that is both emotionally raw and conceptually meticulous. With songs that touch on a diverse range of topics—from the realities of inner-city strife to Islamic mysticism—the album trades mostly in harsh, shadowy sounds and hard-edged beats, spurred on by Carlos Homs’ ghostly keyboard samples, Drew Gress’ pounding bass, Damion Reid’s quick-fire drumming, and shrieking saxophone dialogs between Lehman and Maciek Lasserre. Production was overseen with painterly care by hip-hop engineer Andrew Wright, who won a Grammy for his work on Lamar’s Good Kid, M.A.A.D. City (Interscope), and the album benefits from his expertise. There’s a creeping urgency to “Are You In Piece,” with its spidery saxophone lines, and a wandering uncertainty to “Cognition,” a sidelong take on acid-jazz. The album’s shortest song, “Geminou,” is also its most aggressively experimental, pitting Bandimic’s lacerating rhymes against an eerie, fractured backdrop. It’s visceral and searing, a distillation of the album’s concept in less than two minutes. If this is the direction jazz is heading, Lehman, as usual, is miles ahead.