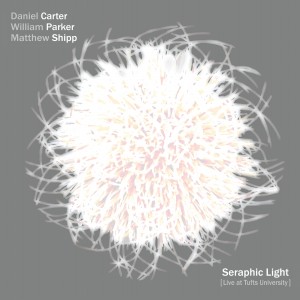 In varying combinations, Matthew Shipp, William Parker and Daniel Carter have been playing alongside one another since the 1980s. And their rapport imbues most records where any two of them appear together with an intuitive cohesion that frees all involved to fearlessly improvise. Still, that doesn’t mean their aesthetics are in complete alignment. Shipp and Parker’s team-ups tend to exude heaviness; Carter is all about the light.

Although Carter’s a veteran of countless pass-the-hat free-jazz gigs, his own playing rarely is aggressive. His clarinet melodies on this 2017 live recording glide over the slowly braiding lines of his partners near the end of “Seraphic Light, Part I,” and the brief alto saxophone phrases that launch “Part II” seem even more airborn. As often as not, Parker and Shipp play around, rather than with, Carter, as evidenced by a moment about 18 minutes into the album’s first section. But this isn’t a problem; the musical affinity here is strong enough that they complement each other without drawing attention to how the pieces hold together. The spaces between them are as significant as anything they actually play.