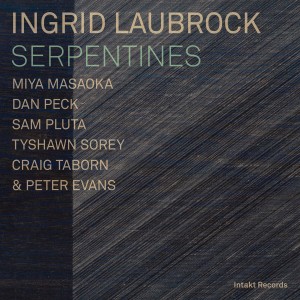 Since arriving in New York in 2008, the German saxophonist and composer Ingrid Laubrock has demonstrated a remarkable development—forming new ensembles and developing new approaches with a consistent rigor and artistic restlessness.

Much of her work has used composition as a forceful trigger for sophisticated improvisational gambits, but she’s achieved a dazzling new peak in that regard on Serpentines, the debut recording from a versatile sextet featuring players that not only toggle easily between the composed and improvised musical worlds, but more often erase any lines between them.

Between the ensemble’s fascinating timbre—blending the rubbery, agile low end of tuba player Dan Peck with the nimble post-traditional twang unleashed by koto experimentalist Miya Masaoka, while Sam Pluta refracts, reshapes and stretches all of the action with his electronic setup in real-time—and a score that grants each musician leeway both in follow- ing the composed material and going off script, Laubrock and her collaborators have created a staggering piece of work.

On a superficial level there’s no missing the influence of Anthony Braxton—a pioneer in melding disparate methodologies—in certain passages. But Serpentines follows a wildly slaloming path all its own, a sonic flow inextricably linked to the strong personalities carving it.

Laubrock has created a work of remarkable density, both in terms of ideas and physical sound, and it yields greater dividends with each spin.