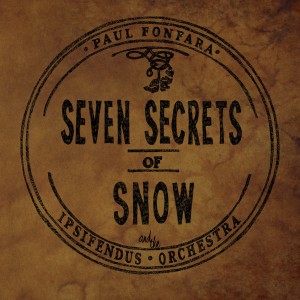 Minnesota-based composer Paul Fonfara received a grant from his home state’s Arts Board to write a seven-movement suite based on short films by local filmmakers. The resulting project, Seven Secrets Of Snow, celebrates Minnesota’s famous (some would say infamous) winter season, and the music within amounts to a satisfyingly cinematic experience.

The album approaches the notion of winter from numerous angles. “Miles Of Twine Revisited” has a serene, wonderstruck quality, owing largely to the clean, penetrating tones of Fonfara’s woodwinds (he counts clarinet, bass clarinet and whistle among his stockpile of instruments) and the keening warble of Andy McCormick’s musical saw. “The Grass Is Always Greener” and “Tar Sands” paint a similar picture, conveying winter as a time of solitude and natural splendor.

It’s hard to pinpoint a specific influence on Fonfara’s work. Klezmer is certainly a touchstone, as is European brass band music, but by and large the music is greater than the sum of its parts. The amalgam of styles is especially potent on the album’s upbeat pieces, like the “Magnificent Himaleti” and “Large Hearted,” which evoke the leaping fires, hearty meals and white-knuckle sleigh rides of winter’s gentler side. Cold has a way of making certain pockets of the world seem warmer, and Fonfara’s album—far-reaching and vivid—captures the season in its entirety.