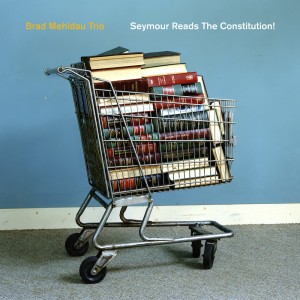 Stirring unwelcomed comparisons to fellow pianists Bill Evans and Keith Jarrett, Brad Mehldau won legions of fans in the mid-’90s with his reharmonization of compositions by writers as popular as John Lennon and Paul McCartney and as obscure as Nick Drake. Mehldau has changed course several times in the intervening 20 years, but Seymour Reads The Constitution! returns him to those roots with interpretations of songs by composers as varied as Frederick Loewe, Elmo Hope and McCartney.

While any stylistic comparison to Jarrett is specious—or even lazy—where the two do collide is in their mutual love for nuanced repetition, subtly shifting phrases or entire motifs that become an additional layer of percussion and create a mild trance effect. Where Mehldau diverges is in the intricacy of these phrases. He never has been a player to shy away from complexity; one of his gifts is his ability to make it all appear much simpler than it is.

“Spiral,” the original composition that opens Seymour, is a perfect example of how Mehldau generates a feeling of stillness while stirring circles of sound. Beginning with a descending pattern, the song has a rich texture of counter-movement, an invitation to get lost in any of the threads or switch between the woven piano parts, Jeff Ballard’s constantly changing drum accompaniment and Larry Grenadier’s sympathetic bass lines. The ensemble’s performance here is strong enough that it might set a new bar for what counts as The Art Of The Trio.

The title composition, inspired by a dream Mehldau had in which actor Philip Seymour Hoffman read to him, is a meditative near-waltz that nicely illustrates the pianist’s ability to make his left hand an additional member of the rhythm section. “Ten Tune,” another Mehldau original, is an outlier, sounding like its parts don’t quite fit together during its ensemble passages. A lengthy, rambling piano solo during the middle section adds to the disjointed feel.

The pure pop pieces—McCartney’s “Great Day” and Brian Wilson’s “Friends”—don’t take on added dimensions, as Drake’s “River Man” did in Mehldau’s hands, but the trio finds much to explore. Where McCartney’s original version was a spare combination of acoustic guitar, hand percussion and voices, Mehldau’s extrapolates the optimistic joy of the lyrics and manages to capture something of Macca’s phrasing in his playing. It’s a neat trick.

Loewe’s “Almost Like Being In Love,” from the 1947 musical Brigadoon, is played as if Bud Powell had just discovered it on the composer’s worktable and taken it to his pals on 52nd Street. Grenadier powers through it, while Ballard provides a lithe ride cymbal. Hope’s Monkish “De-Dah” extends the bop reflection.