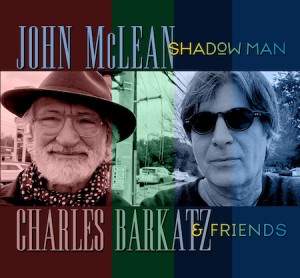 John McLean and Charles Barkatz don’t fit the profile of typical blues artists. But they sure as hell can write, play and sing with genuine greasy-sack conviction as demonstrated on Shadow Man, a collaborative recording produced by Mark “Kaz” Kazanoff with true-blue support from The Texas Horns, an ace Austin, Texas-based rhythm section, and other special guests.

Octogenarian McLean, featured here as a vocalist and songwriter, is a jack-of-all-trades performing artist who was born in New York, grew up on a Texas ranch, studied in Boston and built a lifetime’s worth of experience in theater, cinema and music. He has been a leader of several jazz groups in Paris (including the Fairweather Quintet) and recently appeared in New York at the Cornelia Street Cafe with his quartet. Barkatz, schooled in classical and jazz guitar and fluent in bossa nova, performs and records regularly in the States and his native France. Influenced by Muddy Waters, B.B. King, Wes Montgomery and Jimi Hendrix, the 61-year-old taught himself how to play the blues at a young age. Together, these two transatlantic collaborators cut right to the heart of the blues on 10 original, emotionally charged tracks tinged with elements of jazz and American roots music.

Recorded with everyone in one big room, the music on Shadow Man conveys a communal experience, where spontaneity rules the day and collective moods range from sorrow and regret to flirtatious whimsy and liberating redemption. Highlights include the punchy opener “Leaky Shoes Blues,” the horn-heavy “Brooklyn Blues Cafe,” the dreamy minor-key meditation “Lucia” and the soul-cleansing “Bathtub Blues,” with its filthified blend of amplified harmonica, riffing guitars and honky-tonk piano.