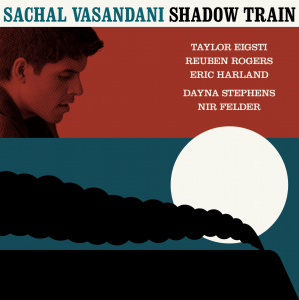 Vocalist Sachal Vasandani works hard to sound as relaxed as he does. Certainly, there’s a natural element to his mellowness: his smooth, warm baritone instrument, for one thing. Perhaps the sleepy, come-hither croon to which he fits that instrument is a creative instinct as well. Details matter, however, and Shadow Train is a wondrous demonstration of Vasandani’s punctilious manner of interpretive work.

His rhythmic conception, primarily, reveals careful cultivation. Vasandani frequently sounds further behind the beat than he is. In fact, he begins most lines, and spends much of them, squarely in the pocket. The effect is achieved in umpteen tiny ways: the restrained delivery; the split-second extension of the syllable “old” past the quarter note on “When I Grow Too Old To Dream”; the unnatural pause between “re” and “turn,” with the accent on the latter, in “That’s All.” He also has some help from his accompanists. When the singer reaches the bridge of “I Concentrate On You,” drummer Eric Harland moves to the front edge of the beat, so Vasandani, in its dead center, still sounds laid back. These are subtleties, but somehow on display here in ways that the singer’s four previous albums elided.

Remarkable as all of this is, the album’s most arresting moment is surely its most contrived. There’s nothing effortless in the darkness of Abbey Lincoln’s “Throw It Away.” Between Taylor Eigsti’s eerie piano fills, Nir Felder’s moody, reverb-filled guitar lines and Vasandani’s masterful harmonic turns, the tune is a stark counterpoint that only reinforces the cunning of the musicians’ art.

Shadow Train: Day In, Day Out; When I Grow Too Old To Dream; That’s All; I Concentrate On You; I Love Paris; Throw It Away; For All We Know; To Love Somebody; Unforgettable; Very Early. (48:50)
Personnel: Sachal Vasandani, vocals; Dayna Stephens, saxophone; Nir Felder, guitar; Taylor Eigsti, piano; Reuben Rogers, bass; Eric Harland, drums.