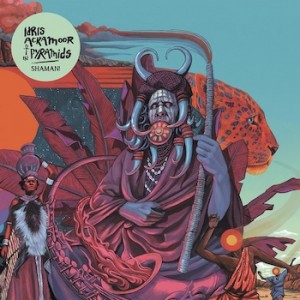 Shaman!, the fourth album by a reconstituted Pyramids, is a densely rhythmic stew with an underlying function.

“Longing for words to be said that there are no words for.” That’s the first utterance heard on the album, helmed by saxophonist Idris Ackamoor, and it serves as a sort of salve, offered by a spiritual healer.

“Theme For Cecil” draws on the group’s roots as an extension of Cecil Taylor’s Black Music Ensemble, the band’s hip bop unfolding into a clave-accented coda that feels like an unexpected birthday present. “Eternity” is fueled by the rollicking rhythm of habanera, the kind that might have been heard echoing down a New Orleans street on a sticky summer night. But Shaman! also is chock full of psychedelic flourishes, including a healthy dose of wah-wah and fuzz guitar from Bobby Cobb. Original 1970s Pyramids member Dr. Margaux Simmons’ flute rises above it all, her solos offering an impeccable ballast to Ackamoor’s saxophone and to the band’s propulsive rhythms.

“When Will I See You Again” deals with themes of death and loss, name-checking El Paso, San Bernardino and Columbine, cities that entered the public consciousness following mass shootings. But the song’s sentiment takes on new meaning amid pandemic-related isolation and mourning. Shaman! rings resolutely with calls for introspection, healing and connection, provisions in short supply for too many of us during these unprecedented times.