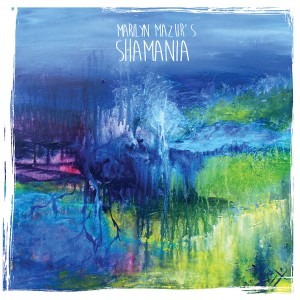 If the title Shamania puts you in mind of a quirky musical revue—sort of a tribal music twist on Beatlemania—then you and Danish percussionist Marilyn Mazur are pretty much on the same wavelength here. The music this 10-piece Scandinavian ensemble makes is built around the concept of urkraft, a Danish word that can be understood to mean an elemental or primeval force, which on this album is framed through compositions that evoke the ritualistic, communal elements of shamanism.

If that sounds complicated as theory, it’s invigoratingly straightforward as sound. Most of the pieces here are built around a basic pulse matched to a simple, folk-like melody. You could call them “cells,” but they’re used more like musical Legos, given the sense of play that goes into the fanciful structures Mazur and company construct. There are chants and airs, gentle beats and insistent pulses, and though the ensemble sound often is immense, the music maintains a refreshing simplicity, so that even the densest passages remain invitingly accessible.

Mazur also intended a measure of theatricality in the music (live, the ensemble includes the improvising dancer Tine Erica Aspaas), and as such, it can be strikingly dramatic. “Space Entry Dance,” for example, opens with a chant-like unison melody over a slow, loping pulse, then—after a thrumming drum and percussion break—morphs into a wistful funk groove, with trumpeter Hildegunn Øiseth soloing lyrically over Makiko Hirabayashi’s Rhodes piano. Gradually, the percussion builds heat, until the piece peaks with a shrieking tenor saxophone solo by Sissel Vera Pettersen. It’s a joy to hear playing that not only maintains such a strong narrative, but infuses it with a sense of adventure. Here’s hoping the ensemble’s next release includes video.