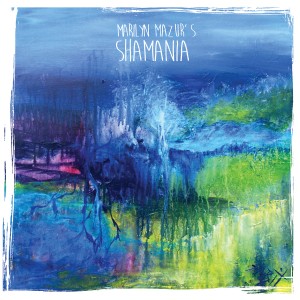 “New Secret,” the first song on Danish percussionist Marilyn Mazur’s latest album, begins with the hushed expectancy of an invocation, as Josefine Cronholm’s chants and Makiko Hirabayashi’s circular piano comps seem to summon the rest of the album’s 10-piece ensemble out of the shadows. Much of Shamania—the name of both the group and the album—unfolds in similar fashion. As a composer and bandleader, Mazur favors the oblique approach, letting her songs coalesce slowly around repeated rhythms and motifs, rather than immediately declaring their intentions.

With Shamania, Mazur has assembled a Scandinavian supergroup, featuring such powerhouse players as singer/saxophonist Sissel Vera Pettersen and longtime Mazur co-percussionist Lisbeth Diers. At their most kinetic and polyrhythmic, the players here outshine any Mazur project, past or present, especially on the breathtaking “CHAAS,” which evokes the best ’70s experiments of one of Mazur’s early mentors, Miles Davis.

For all their ritualistic explorations, the band never strays far from an underlying sense of unbridled joy. That emotion, easing in at every turn, serves as a kind of connective tissue for the album’s stylistic digressions, which include a shuffling, Cuban-inspired showcase for Hirabayashi and Pettersen (“Heartshaped Moon”) and a dazzling display of Mazur’s virtuosity on the balafon, a kind of xylophone indigenous to Mali (“Shabalasa”).