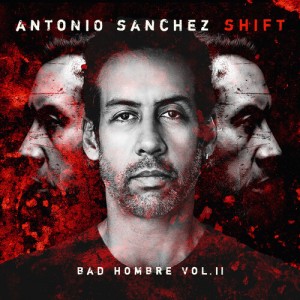 Drummer and composer extraordinaire Antonio Sánchez revisits his Bad Hombre alter-ego, which produced the 2017 Grammy-nominated Bad Hombre. Much of the ferocity on that album came from Sánchez’s anger toward former U.S. President Donald Trump, particularly his vicious attacks on Mexican people who were trying to cross the U.S. border to escape desolate circumstances. This time around, the coronavirus pandemic serves as an intriguing propulsion engine. But instead of shoegazing quietude that typifies many pandemic-era albums, the bristling energy of Sánchez’s music isn’t sacrificed.

For Shift, Sánchez cast his net wide, requesting bare-boned tracks from some of his favorite musicians such as Becca Stevens, Meshell Ndegeocello, Trent Renzor and Lila Downs.

In turn, he retooled the material using his multi-instrumentalist acumen on guitar, keyboards, bass and, of course, drums, and well as his superb production ingenuity.

The results are a mesmerizing assortment of cuts.

The title also connotes a shift in thematic tone, too. A standout cuts is “The Bucket,” an eerie, soul-stirring piece featuring Becca Stevens singing a soliloquy from a play, co-written by poet Sterling Cunio, who at 16 was sentenced to two consecutive life sentences for two killings, and another 23 years for robbery.

Much of the music on Shift finds Sánchez channeling his early love of rock. It’s a move that may put off some listeners only accustomed to hearing him in the jazz vein. But like before, once you embrace his Bad Hombre persona, the easier you’ll be seduced.