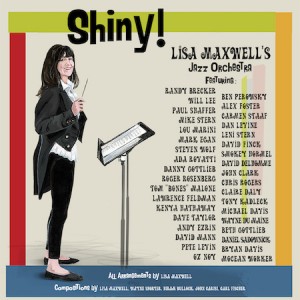 After years working for an impressive variety of outfits, including Guns N’ Roses, Carole King and Spinal Tap, this is Lisa Maxwell’s first release of her own material and arrangements, and it’s an unabashed walk through the music she loves. As well as replicating the high-shine elegance and fizz of Lalo Schifrin and others, it’s a more specific tribute to the late trumpeter Lew Soloff, a friend who offered the fatherly advice that Lisa should get down to putting out her own stuff.

And what exciting stuff it is. “Ludie,” which was written in memory of Soloff, is in tight three-quarter time, perfectly weighted and just crying out for use under somebody’s credit sequence. “Son Of Creeper” remembers another lost friend, guitarist Hiram Bullock, who’s replaced on this arrangement by a rejuvenated Mike Stern, playing some of the most direct and telling solos of his career. “Shiny!” is pure 1970s nostalgia, with Rhodes and clavinet, electric bass and two guitarists.

If any of this suggests that Maxwell just likes to rock out and groove, the original “Hello, Wayne?” offers a brilliant intro to a subtle, understanding arrangement of Wayne Shorter’s “Beauty And The Beast,” again done with deep conviction and authority. A striking record—one that might be overdue, given its quality.