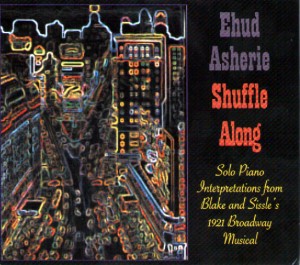 This is a very specific project, as Ehud Asherie interprets selections from the Broadway musical Shuffle Along, which was written in 1921 by fellow pianist Eubie Blake and lyricist Noble Sissle. This was the first black musical to tour the white theater circuit of that time, enjoying a successful three-year run, and launching the careers of Paul Robeson and Josephine Baker. At this point, the adoption of jazz songs was a radically fresh venture for such a show.

Asherie was born in Israel, but is now deeply embedded in the New York scene, playing regularly at Smalls, Mezzrow and Fat Cat. He favors an authentic period style for this solo piano project, playing a Steinway Model B and laying the tracks down at Michael Brorby Recording Studio in Brooklyn. He’s not interested in any updating of these pieces into the present time, via any kind of stylistic re-invention, but he is concerned with perpetual improvisation, always searching for new twists within these labyrinthine tunes.

Asherie is respectfully aiming to call up the playful spirit of the 1920s. The gently striding “Gypsy Blues” is nonchalant, softly percussive and edged with decorative frills. There’s an open friendliness to the execution of this repertoire, as “I’m Just Wild About Harry” (the show’s biggest number), which opens with a spacious prelude, then develops into a spirited cascade of rippling phrases. These varied dynamics spin an involved tale over the course of around four minutes. It returns a few tracks later, as a waltz.

“Bandana Days” might be a madcap dash, but that doesn’t prevent a graceful melody from unfolding, even if at an accelerated rate. Asherie concludes the song with what can only be called a politely head-banging swing. It’s just as much indebted to Fats Waller as to Blake.

The strutting energy continues into the peculiarly titled “If You’ve Never Been Vamped By A Brownskin,” which finds Asherie taking on different personas, paces and patterns.

This short album concludes with the tender ballad, “Love Will Find A Way,” setting the listener down softly, on a downy pillow of stardust trinkles.