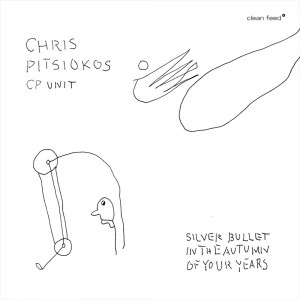 About 40 years have passed since the release of Ornette Coleman’s first electric record, Dancing In Your Head, and people still are trying to decode its information. When the members of his Prime Time band stepped out on their own, their subsequent music didn’t adhered to a single sonic ideology. But all those recordings have made clear that there’s plenty of room for an individual to make their own mark while dealing with Coleman’s ideas. There’s also room for younger musicians, like Chris Pitsiokos.

The Brooklyn-based alto saxophonist has been working with Prime Time-derived sound elements for at least half a decade, and with the latest version of his band, CP Unit, he’s fashioned a persuasive combination of harmolodic jazz and contemporary noise rock. The bandleader also plays electronics, and he’s not dabbling. On “Improvisation 27,” he peppers a terse guitar-drums face-off with blips, and a moonscape synth bass line provides the foundation for jousting between alto and guitar on “The Tower.” Guitarist Sam Lisabeth, a veteran of the herky-jerky rock combo Guerilla Toss who shifts easily between Sonic Youth-like swathes of noise and stuttering, Bern Nix-like passages, is key to the ensemble’s success. It’s his pungent tone and wayward lines that turn “A Knob On The Face Of A Man” from a jaunty calypso into a white-knuckled amusement park ride.