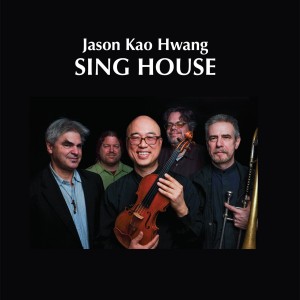 Violinist Jason Kao Hwang’s group Sing House makes its recording debut as a unit on this eponymous album. The band performs four lengthy and episodic selections that clock in between 11 and 14 minutes. Hwang’s avant-garde writing develops as it progresses, expertly mixing planned portions with free playing, and giving each musician their opportunity in the spotlight.

When evaluating and attempting to describe performances of this sort, the main questions become, “Are the results colorful and interesting or merely dull? Is it likely hold the listener’s attention or does it decrease in interest as it goes?”

Due to the variety of moods, the brilliance of the musicians and the mixture of composition and improvisation, Sing House is a success. The music is never predictable and the journey passes through many unexpected areas.

The opening “No Such Thing” has a fast theme that sounds like free improvisation. Drummer Andrew Drury takes the initial solo, and trombonist Steve Swell creates the first of his many rambunctious and highly expressive improvisations on this CD.

“Dream Walk” sounds very much like the soundtrack to an eccentric dream. The group, with pianist Chris Forbes in the lead, sometimes gives the impression of a staggering walker trying with only mixed success not to fall. Quiet sections alternate with riotous parts with bassist Ken Filiano’s bowing a strong asset. “When What Could” starts out somber but picks up in tempo and spirit as it progresses. “Inscribe” closes the set with a colorful melody, more bowed bass, some unusual patterns and a drum solo.