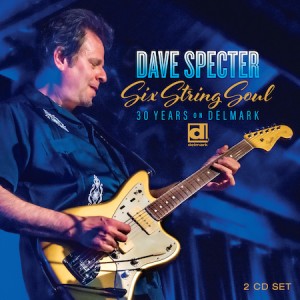 Music writers like to play up Dave Specter’s perceived precocity, i.e. “He looks too young to have a 30-year retrospective.” However, quick back-of-the-napkin math reveals Specter was nearly 30 when his version of the Louis Jordan classic “Buzz Me” (taken from his 1991 debut album) was released.

Perhaps the sleight of hand here resides in Specter’s ability to hold his own in configurations consisting of a wide-ranging assortment of much more seasoned vets, a fact showcased on Six String Soul to great effect. Backed by an intergenerational cadre of players and featuring performances from legends — from Otis Clay to Jack McDuff and from Lurrie Bell to Jefferson Airplane’s Jorma Kaukonen — this expansive collection also showcases Specter’s chameleonic ability to fit into blues and jazz modes with equal mastery.

Six String Soul, though lengthy, never sags, which could be attributed to Specter’s predilection for recording in a never-ending variety of contexts. Earlier releases, such as the aforementioned scene-setting opener, are more rooted in the blues, while later releases, such as “Unleavened Soul” (featuring the tremendous McDuff in his element), reflect his interest in soulful, Kenny Burrell-tinged jazz. Specter’s most recent releases, such as the timely “Ballad Of George Floyd,” have stylistically swung back further toward the direction of his blues roots. Other highlights include “Specter’s Walk” and “Fortune Tellin’ Man.”